After five months of demonstrated solidarity and unity among our membership and the tireless efforts of our bargaining team, GEO members voted overwhelmingly to ratify a new employment contract that will take effect on May 1st and will run until 2020. Our new contract marks a major step towards the social inclusion goals that framed our platform, and sets national precedents for labor bargaining among graduate employee and teachers’ unions. 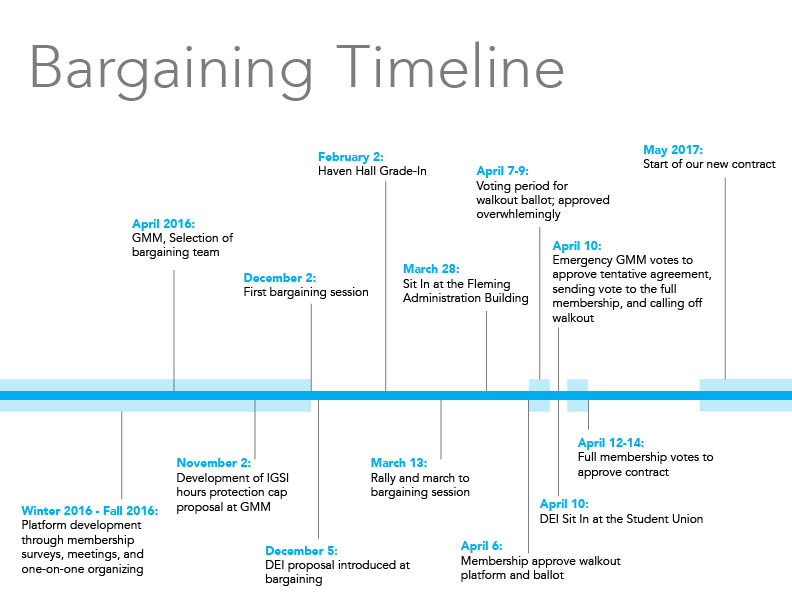 Thanks to the determined work of our membership, we won:

These gains were only possible because you showed up! 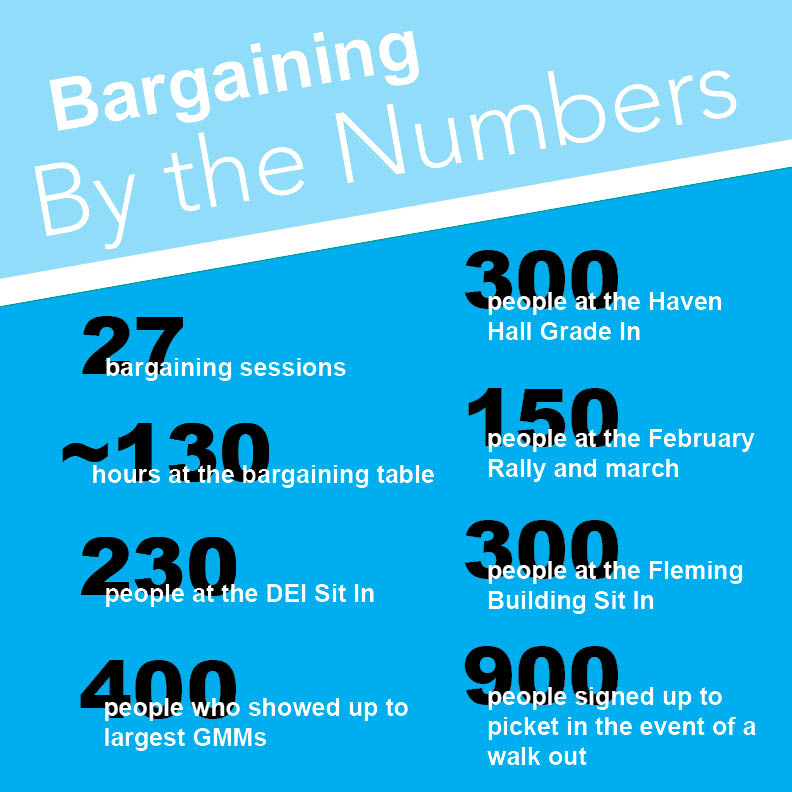 But there’s a lot of work still to do. While the victories on our contract represent significant advances, they are not enough to address the vulnerabilities and struggles of many of our members. Our members know the importance of maintaining a solidarity outside the confines of the contract, and next year we’ll need to strengthen our collective power to pursue that solidarity through non-bargaining tactics.

Based on decisions made by members at GMMs and caucus meetings over the past year, our upcoming priorities are organizing around DEI & international GSI issues. Domestic students need to remain vigilant of potential instances of hiring discrimination against international GSIs and be willing to grieve when necessary. Our membership must leverage the recognition of diversity labor in our contract to ensure that this recognition is translated into adequate and compensated capacity for implementing DEI plans in every university unit. This can only happen with sustained member pressure through their respective units.

As we enter a new era under Michigan’s so-called “Right-to-Work” law--which require unions to represent everyone in their bargaining units, but no longer allow unions to require that all represented people pay dues–we will be looking to the existing membership to demonstrate their strong commitment to the union by staying involved, as well as asking for your help in encouraging new GSIs and GSSAs to join our ranks.

We need your help to continue the work we started with the contract campaign. If you are committed to helping GEO fight for more paid DEI GSSA positions, protections of International GSIs, and affordable and inclusive access to healthcare for all, get in touch at umgeo@geo3550.org.

You can also keep up to date on committee meetings on the GEO calendar. All meetings are open to our membership.

Next meeting: Grievance and IGSI Caucus on Monday, May 1, 4pm at GEO Offices

Solidarity: Stand With #AcademicsForPeace in Turkey

Beginning in January 2016, a group of 2,212 academics in Turkey have signed a declaration, known as “Academics for Peace,” calling for an end to human rights violations in the Kurdish provinces. As of March 2017, at least 383 signatories have been purged from their jobs, banned from traveling abroad, and denied recourse to legal dispute. During this difficult time, these scholars have to support their livelihood and families. Research Institute on Turkey and Bostonbul have launched a campaign to raise an initial fund of $105,000 and to support about 35 academics for 6 months over minimum wage. The funds will be fully allocated to financially support the Academics for Peace through close collaboration with Education and Science Workers’ Union, Egitim-Sen, and other associations which are actively assisting the purged Academics for Peace at the local and international level.

How You Can Help

In May, the Center for Research on Learning and Teaching is offering a number of workshops on Inclusive Teaching that may be of interest to our members. Workshops include:

GEO in the News